Another Allegiant Air flight at St. Pete – Clearwater International Airport aborted its takeoff on March 4, 2017.   The Tampa Bay Times ran an article on November 2, 2016 entitled “Breakdown at 30,000 feet,” and everyone who flies Allegiant Air should read this article.   When will news outlets in Northwest Illinois start reporting the facts on Allegiant Air?   Will it take another ValuJet incident for people to wake up?    I hope not.

This posting is an update to the previous posting. It is hard to believe, but it is being reported that the plane that made an emergency on June 1 is the same plane that made an emergency landing today (June 2). It is even being reported that it was the same mechanical issue both days! For God’s sake, what kind of airline is this? A plane makes an emergency landing one day, and the next day it is back in service and not repaired. See Tampa Bay Times article at http://www.tampabay.com/news/business/airlines/allegiant-air-flight-returns-for-emergency-landing-after-circling-gulf/2279958

Local Newspapers and TV stations in Northwest Illinois continue to ignore safety issues at Allegiant Air. This morning an Allegiant flight to Stewart-Newburg Airport in New York from Clearwater, Florida made an emergency landing at St. Pete-Clearwater International Airport. Fox Channel 13 reported this morning (June 2) that the plane had hydraulic issues, and spent an hour circling in the Gulf dumping fuel. Fortunately, the plane made a safe landing. See the television report of Channel 13, Tampa, Florida at http://www.fox13news.com/news/local-news/151770367-story

What makes this matter even worse is that this is the second emergency at St. Pete-Clearwater International Airport by an Allegiant plane in two days. Channel 8 in Tampa, Florida reported that on Wednesday (June 1) Allegiant flight 871 made an emergency landing after declaring an emergency due to a mechanical issue.

See postings on Good Day Illinois on May 9 and January 25, 2016 on safety issues at Allegiant Air. What will it take for local media to report these issues? 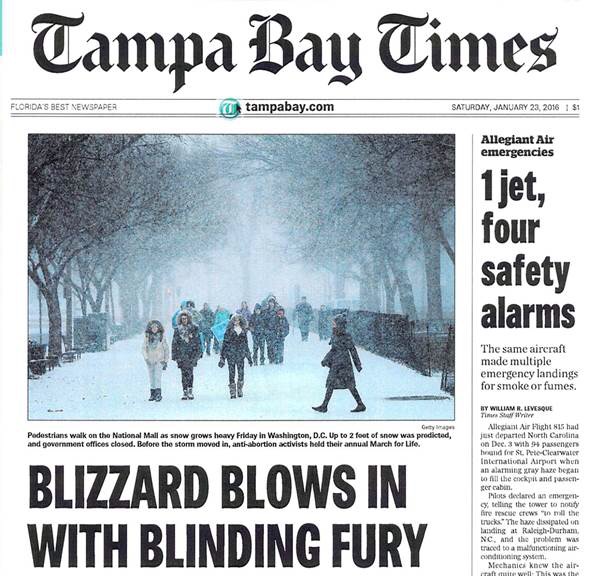 The Rockford Register Star and The Journal Standard have not reported on a consistent basis the problems that Allegiant Air has had during this last year. One paper that has reported the problems with Allegiant is the Tampa Bay Times. A recent article stated that one of Allegiant’s planes was involved in four emergency landings in a six week period. http://www.tampabay.com/news/business/airlines/allegiant-air-appoints-new-coo/2262384&nbsp;

Allegiant had five emergency landings on flights from Florida in a one week period during the holidays this year. http://www.tampabay.com/news/business/airlines/allegiant-air-had-five-emergency-landings-out-of-florida-during-holiday/2259958

A very serious incident occurred on August 17 in Las Vegas. The report by KNTV in Las Vegas began as follows:

“Is Allegiant Air a tragedy waiting to happen? That’s what aviation experts are wondering as the Federal Aviation Administration investigates the latest mechanical failure at the Las Vegas-based carrier.” See the report at http://www.ktnv.com/news/contact-13/allegiant-aborts-takeoff-after-critical-flight-system-fails

Allegiant is the major carrier serving the Rockford, Illinois airport. Without Allegiant there would be practically no commercial service at this airport. Passengers flying out of Rockford need to know the facts about this airline. Read the articles and watch KNTV report, and then you decide if you want to fly this airline.