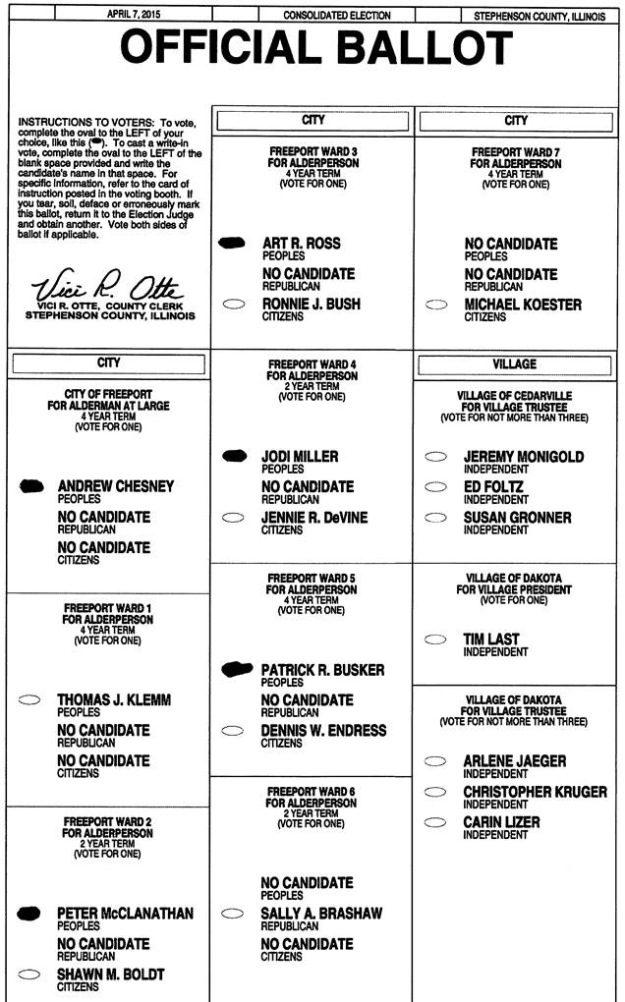 The City of Freeport cannot afford to continue the present approach to the issues facing the City.   Freeport needs leaders – not followers who will continue to support and promote the failed policies of the past.    For that reason vote for change by supporting the following candidates for Freeport City Council:

Andrew Chesney for Alderman at Large – Although he has no competition, he should be supported.  We need young people like Andrew to challenge the failed policies of the past.

Peter McClanathan in the 2nd Ward – Peter will listen to the people of the Freeport and not rubber stamp the polices of the Gitz Administration.   The present alderman, Shawn Boldt, has one solution to every problem – more taxes!

Art R. Ross in the 3rd Ward – His opponent, Ronnie Bush, has been on the Council for 20 years.  Let’s thank Ronnie for his service, but let’s face it.  Ronnie Bush and most his fellow alderpersons have failed to address the problems facing Freeport.  Give him and the other incumbents another 4 years and Freeport will be joining Detroit in bankruptcy.

Jodi Miller in the 4th Ward – Jodi knows what it takes to run a business.   This should not even be a race.  Jennie DeVine, her opponent, has done nothing during her years on the Council unless you count wishing her constituents “happy birthday.”  She can do that from her home!

Patrick R. Busker in the 5th Ward – Again, this should not even be a race.  Dennis Endress, the present alderperson, is in the same category as Jennie DeVine except he says absolutely nothing at most council meetings.    What has this man done during his term on the Council?   The answer is simple – NOTHING.